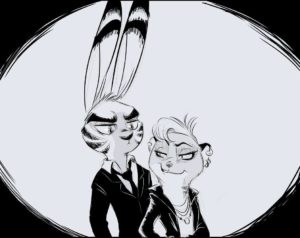 That day, Maria O’ Connor was feeling in particularly high spirits. She had just flown back from Costa Rica, where she had carried out a kind of important mission – during which she had also managed to have a couple of sexual intercourses with a certain jaguar with two off-the-chain pecs – and now, she was heading to Gregory Kohle’s office to submit her report, as usual.

The delight was such that she almost thought she could do without her daily cig, but the very moment that idea crossed her mind, Maria just laughed her ass off in the empty hallway. “Hey, look, I’m turning into a health freak!” she claimed, the sound of that monumental bullshit echoing in the building like a sick joke. Oh, she was so humorous sometimes.

When she turned the corner, the elevator came into sight. Maria looked around, to check for the possible nearness of other mammals; then, found that she was alone on the floor, she decided to help herself to a lift, since, for once, she wouldn’t have been compelled to share it with someone else. But just then… another animal showed up, coming from the hall to the right, and stalked towards the elevator.

Maria kept the colorful swear which was purling in her throat for herself, but not the caustic remark that followed: “Hey, Bunnyboy, get out of the road. That’s my ride.”

Said bunny stopped dead in his track, and slowly met her eyes. Maria paid heed to his six black stripes on his face, three on each cheek, which instinctively reminded her of claw marks. As she approached him, she realized that it was just the color of his fur that looked that peculiar way in those spots.

But that wasn’t the only thing that she noticed.

He was tall – taller than her, but that was no wonder since it didn’t take much to beat Maria in terms of height. Pleasurably slender, genteel; he was wearing a black suit, which enhanced his willowy figure, and his eyes, now that she saw them more closely, were ice blue, cold and keen.

“Excuse me,” he said, “I don’t think I understood.” There was no sign of hostility in his voice, that much was clear and obvious. However, his ears were perked high and his face was equal parts puzzled and attentive.

All things considered, he probably was an idiot. If anything, a hot idiot.

“I can hardly believe that you didn’t hear me, given that pair of ears,” she quipped.

This time, the bunny frowned. “I said I didn’t understand, not that I didn’t hear you.”

“It’s even worse, then. Something must be wrong with your head!” She pointed a finger to the right side of her head and smirked lightly.

“Actually,” he corrected her, “the Broca area is a region in the frontal lobe of the dominant hemisphere – which usually is the left. Unless… your own dominant hemisphere is the right one. If that’s the case, I offer you my deepest apologies.” However, his tone was anything but apologetic.

“…” The paw Maria had lifted to her head fell by her side as she watched him with wide, sharp eyes. “What’s your name, Bunnyboy?”

The lapin narrowed his eyes for a moment as if he was weighing her question. Then, a rather tired sigh escaped his lips. “… Savage,” he said. “Jack Savage.”

“Savage?” A grin flashed on her lips. “And what are you doing here, Savage?”

“Work.” It was quite obvious that Jack Savage didn’t relish the way Maria was talking to him. On the other hand, the meerkat was rather enjoying the sensation of those blue, now leery eyes staring at her figure with a circumspection the bunny wasn’t even bothering to hide anymore.

It was… arousing, in a sense. That’s why Maria licked her lips lasciviously – and he did notice it, because his nose twitched a bit – and drew nearer. “I’ve never seen you before. Are you new around here? Oh, by the way, I’m Maria O’ Connor,” she added, stretching her paw again, this time towards him.

Jack stared at that paw as if it was a land mine – ready to explode the exact same time he’d make the fatal mistake of touching it – and eventually chose not to shake it. “I could say the same about you, Ms. O’ Connor,” he returned, giving her a penetrating glare.

“Ask around, you’d be surprised how many mammals know me… and how well.”

She had positively underestimated him. It didn’t happen very often, that she was wrong about a mammal – a male, no less. Her little misjudgment felt oddly pleasurable, though. “What age are you?”

“I can’t see how this information could be of any relevance at this point of the conversation.”

“You know what? You’re right,” she agreed. “It doesn’t really matter how old – or young – you are… Jack.” She stepped closer and took a good look at him, licking her lips again. This time, he didn’t flinch one bit. “You do look young, indeed, but not quite… unprepared.”

“If I were unprepared, I wouldn’t work for a private intelligence agency.”

“A little cocky, aren’t we? But I don’t despise guys like you.” She chuckled as she rolled her head closer to the lapin’s chest – his pecs, too, had to be no joke. “So, what were we talking about…?”

Jack Savage stared back at her – the ice in his eyes sending chills of excitement down her spine – and replied, coldly: “Nothing, actually. And now,” he added, glancing at his wristwatch, “I should really get going.”

“You’re just leaving like this?” She laughed. “After you teased me so much?”

“… I don’t remember ever teasing you.”

“And yet…” She moved her paw to take his, fully intended to let him feel the warm evidence that he had seduced her and now was about to get away like a coward.

Much to her surprise, she couldn’t.

In a blink of an eye, the hare had silently slipped behind her back – a movement Maria became aware of only when she heard his voice speaking just over her shoulders, in an almost sardonic tone: “I’m not particularly fond of this kind of interaction. Nor, with all due respect,” he continued, his voice as sharp as a razor, “I think you could make me change my mind, Ms. O’ Connor.”

Maria’s lips twisted into a mischievous grin. “You’re just saying that ‘cause you don’t know me, Bunnyboy,” she countered, turning around slowly… “but I could teach you a couple of things, if you— hey!” … just to see Savage’s back already far away from her. “Where are you going?”

“Work,” he stated, like it was obvious. “Feel free to take the elevator, if you like. I will take the stairs.”

“You really want to end our fun so soon?” She asked, her smile slowly cracking up. “… Hey, I’m talking to you, smartass!”

“I have a business meeting in ten minutes, Ms. O’ Connor.” Annoyance could be now recognized in his voice, as he continued: “I think I’ve wasted enough time already.”

“You fucking little bastard,” she hissed through clenched teeth, “get your ass back here now!”

“To kick the shit out of you, what else?”

“That sounds like fun,” he admitted. “Maybe next time. Have a nice day, Ms. O’ Connor.” Those were his last words before he hopped up the stairs, nimble and stealth.

Maria was speechless… for about three seconds. “I can’t believe that,” she whispered…

… and then, she shouted: “That asshole! Hey, I know you can still hear me, Savage! You’re a fucking asshole and I’m gonna get you for this! Understood?”

No sound came in response, which added more fuel to the fire. “Gonna carve your fucking muzzle up! Did you hear me?”

There was no way he didn’t – he was a damn lapin, for fuck sake – but still, he had chosen to ignore her. Which was something Maria couldn’t definitely overlook.

A low, little growl vibrated in her throat. The anger building inside of her was slowly turning into a primary, wilder emotion.

“You won’t get away with this, Bunnyboy. I’ll make you regret your irresponsible behavior,” Maria murmured as she took one of her pocketknives from inside the sleeve of her jacket. She licked the blade, her lips curved into a devilish smile.

View all posts by aoimotion