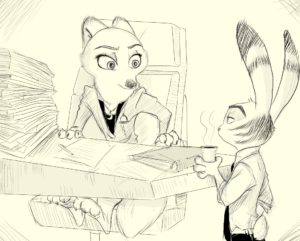 In the face of that question, an electrical discharge seemed to pass through Cynthia Walker. Her ears suddenly perked up, her amber eyes widened and her paw, which had been lazily lying on the desk up until that moment, twitched and hit the pen nearby.

It fell to the ground and rolled to the feet of Jack Savage. At that point, the hare corrected his sentence: “… Chamomile?”

“I…” the vixen looked at him, shocked. “You surprised me, Mr. Savage.”

“I didn’t mean to” he replied, dryly. “You had your head resting on the desk, so I thought you had fallen asleep.”

Judging by her foggy eyes, his deduction was probably quite correct. However, if he had got to know her a bit, Cynthia would have never admitted it.

“You caught me in a weak moment.” She immediately played defense, and Jack couldn’t help but sigh because of that predictable reaction.

“It wasn’t supposed to be a criticism, Miss Walker.” … Despite his resignation to her attitude – or, maybe, because of that – the hare left the cup next to the pile of files rising from her desk – otherwise, there was a good chance that she would have refused it. “Drink it, if you want, or simply throw it. Your choice.”

Cynthia stared at him, blankly, and tilted her head. “Why you…?”

But he immediately cut her off. “I’ll leave you to your business. If you need help, give me a call.” With that, Jack Savage gave her a slight nod and proceeded to leave the office. When he reached the door, she called him.

“Jack.” She just pronounced his name, nothing more than that… but somehow, that mere word managed to be more eloquent than any other sentence they had said that day.

Jack turned and smiled at the vixen. “You’re welcome” he replied, to save her the effort of saying words she wasn’t used to. “Good work, Cynthia.”

In his mouth, her name had a bittersweet taste.