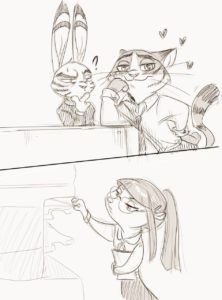 Zac said, out of nowhere: “Stella is beautiful.”

The lack of context disturbed Jack, so he turned to the cat with a puzzled expression all over his face. “What?” He asked, but his younger apprentice didn’t give him a proper answer; the cat just stared at something on the other side of the office, with dreamy eyes and his long tail wagging around, restless.

It was almost touching, Jack thought for a moment.

“Zac…” the hare sighed, “did you already fill the report I gave you this morning?”

“…” Jack frowned at the empty file, sadly lying on Zac’s desk. “You loved it so much you decided to keep it blank?”

“She looks so gorgeous with that ponytail, doesn’t she?”

Jack, for the sake of argument, left his desk with a sigh and came to see the aforementioned gorgeous creature. He caught a glimpse of a certain ferret whose eyes could kill an adult mammal with just one glance.

She was… actually… quite far from being the embodiment of gorgeousness, to be honest. “Well… if you ask my opinion—”

“Ah!” Zac got excited all the sudden. “She looked this way!” The cat turned to Jack and claimed: “She looked at me!”

“How nice.” Jack forced a smile. “But the report—”

Jack heard the crack of his patience being mercilessly crushed. “Zac…”

Stella, at the end of the hallway, gave Zac a look so angry that even Jack got goosebumps. ‘… at least her bloodlust is gorgeous, in a sense.’

Eventually, Stella walked away from their field of vision; then, Zac became very quiet, as if his breath of life had suddenly abandoned him.

Jack asked, worried: “Zac, can you hear me?”

The cat whimpered softly. “… boss, I have a confession.” Suspense descended upon them, or maybe it was just moisture in the air. “I think… I’m in love.”

‘I think you’re just lazy.’ Jack decided to keep that last thought for himself – a courtesy for his cute, idle most of the time assistant. “Zac…” Jack began, but then he realized he didn’t have a spare thought prepared and so he became silent, with the unpleasant feeling that the report would have never been filled that day.

And perhaps not even the next one.

“What, um…” The hare scratched the back of his head, trying to find something to say. “What do you… love about Stella?”

‘Oh, now that’s a great question, isn’t that?’ Cynthia’s face suddenly appeared in his mind. ‘Why can’t you just keep your little mouth shut, Savage?’ She inquired, not so softly. ‘What are you, a cretin?’

‘I probably am,’ he agreed, just because it was happening all inside his creative mind.

Cynthia’s projection nodded. ‘Of course,’ she agreed, then vanished in a puff of smoke.

“Well, she’s tiny,” Zac answered, taking Jack away from his savage fantasies, “and stubborn, and cute. She always looks like the entire world annoys her, but I bet that she’s actually a cutie pie. I…” The cat giggled a bit, looking a little embarrassed. “I kinda want to protect her; you know, the ‘prince and princess’ sort of stuff. And, oh! I want to know more about her, and I want her to smile. I’m sure her smile is beautiful.”

“What is your conviction based on?” ‘And what’s a cutie pie, anyway?’

Zac laughed. “You have a big ‘I don’t understand’ written all over your face, boss.”

“Is that so?” Jack touched both his cheeks, confused. Then, realizing they had already lost too much time, he cleared his throat and said: “Zac, I hate to repeat myself, but there is a report to fill. Now.”

The cat gulped. “Oh… you’re right. The report. The report you gave me today so that I could fill it. That report.”

“Yes, that report.” Jack pointed at the sheet in question. “Will you take care of it, Zac?”

“You have thirty minutes.”

“… And now twenty-eight. For any further objection, I’ll subtract a minute, so be quiet and fill the report.”

Zac, whose mouth was opened but no sound would come out of it, raised both arms in the air in despair.

Jack smiled and offered him a bow. “You’re welcome.”