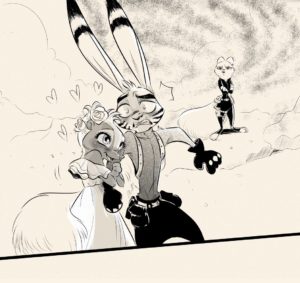 It was a perfect ‘princess carry’, straight out of a romantic movie. I watched him as he gallantly held the princess of Venezuela in his tiny – yet strong – arms, his slender figure contrasting with the size of the mammals that were surrounding the cave where she had been held captive in the last 48 hours.

It was perfect… and absolutely disgusting.

“The princess is safe.” One of Diana’s personal guards, an elephant, waved his trunk to them. “This way, Mr. Savage.”

Jack nodded and got the princess down – ‘It was about time, Jesus Christ’ – with a soft smile. “Are you okay, Princess Diana?” He asked.

“I’m fine, thank you.” The princess took one of his paws and held it for unknown reasons. “You were so brave…” she said, “So fearless! Intrepid! Undaunted…”

“Savage,” I began, approaching them, “Did you secure the area?”

“Yes,” he confirmed. “Nobody is going to come outside the cave, not alive, at least.”

I clicked my tongue with a grin. “Tsk. You really are Savage, aren’t you?”

“It’s Walker, and I wasn’t naming an adjective. I was just addressing my… associate.”

“…Associate.” Jack looked at me with canny eyes. “I keep downgrading, it seems.”

I rolled my eyes. “Aren’t we associates?”

“And what will we be tomorrow, acquaintances?”

“Don’t fight!” the princess suddenly bawled, coming between us. “I just got rescued, we need to celebrate!”

“Actually, we need to come back to headquarters.” I put a pawn on Jack’s shoulder – who glared at me, unhappily – and gave the skunk a wry smile. “I hope you won’t be kidnapped again, Princess Diana.”

“Aw, fine then.” I let his delicate shoulder go with a sarcastic smirk. “…Poor thing.”

“But…” Diana mumbled, “you should relax a bit, before returning to headquarters. How about I give a party, tonight?” She suggested. “Would you like to come? I mean, you worked so hard… you deserve a little entertainment.”

“Um…” Jack scratched his cheek, a bit flushed. Then, he turned to me and asked: “Walker, what do you think?”

‘… I think Princess Diana needs to mind her damn princely business.’ “We have no time for parties, Savage.”

He jumped a bit and gave her an embarrassed smile. “P-Princess Diana, you’re really kind… but we can’t stay.”

“Because your associate won’t allow you?” She inquired, frowning at me. “Ms. Hiker, please let him decide for himself.”

“He can’t decide for himself, we are a team… and we’ll come back as a team. End of the story.”

“Yep, that’s how things are supposed to be,” I said, rolling my eyes. “We secured you, so there is no reason for us…”

“Then, change your mind!” she proposed, happily. “You can’t possibly refuse an invite from the princess of Venezuela.”

‘Oh, pretty sure I can.’ I was about to reply, but then Jack signaled me to be quiet. “All right, princess. We’ll stay for the party.”

“E-err…” Jack blushed and tried to free himself from her hug, but with little success. “Can you, like…”

The scene behind my eyes was too unrealistic for my brain to correctly process it, and since I couldn’t incinerate the Venezuelan Princess, I directed my anger towards the stupid hare. “Savage, would you mind coming with me for a second?” I hissed.

“O-oh, yes! Excuse me, miss…” he finally managed to break her embrace and followed me.

When we were within a reasonable distance, I started: “What the hell are you thinking? Did you get dementia? Colonel told us to return as soon as the princess had been rescued!”

“I didn’t forget,” he replied, “but, you know, I can’t exactly upset a princess.”

“But you have no problem upsetting me, huh?”

“Well, you’re not a princess. And!” he added, seeing that I was about to punch him in the face, “I suppose we are… close enough to comfortably upset each other?”

“We’re nowhere close now, Savage. Basically, we just happen to work in the same place. Sometimes, even in the same team.”

He didn’t reply, which didn’t surprise me. However, it was like his face was trying to talk on his behalf – and, honestly, that surprised me a bit. “Don’t make that face,” I muttered, “it doesn’t suit you.” ‘And… it was you who wanted this. You.’

“I suppose… you’re right.” He looked down when he admitted that. “Anyhow, Walker, the primary reason why I wasn’t willing to disappoint a princess was…” He looked back at Diana for a moment and said: “Money.”

“And… since when do you care about this kind of thing?” I asked, a little confused by the way he had suddenly changed the topic of conversation.

“Since the GSD partly lives on donations and Diana is a wealthy princess.”

For some reasons, I felt guilty. It was uncomfortable. “Well, the fact remains that she’s annoying as hell. Money isn’t, though, so… you got a point, I guess.”

“Oh, thank you,” he joked, sardonically. “Shall we head to the palace, then?”

I instinctively massaged my eyebrows, feeling bushed. “If it can’t be avoided…”

Jack nodded, and then he moved towards Diana, who was still waiting for our return with a dismayed expression. “So? Will you stay or not?”

“We’ll stay,” he reassured her, smiling. “But we have no appropriate clothes for the party.”

“That won’t be a problem, I’ll put an entire wardrobe at your disposal!” She declared, joyously, before assaulting Jack’s arm again.

“We’ll sojourn in your palace just for the party,” I specified, as my very existence was being completely ignored. “Once it’s done, we…”

“Let’s not do this here, okay?” She punctually interrupted me, with an awfully wide smile. Then, she returned her whole attention to the stupid hare. “I hope my humble house will be to your liking, Jack.”

“Oh, I’m sure it will…” he briefly turned to me and tried to mouth a sentence, but I couldn’t grasp it.

Then, nobody was looking at me any longer.

Not Jack, not the princess, not even her personal guards. ‘This…’ I groaned at the orange sky. I didn’t even have the energy to complain in my own mind. ‘… This isn’t going to end well, is it?’