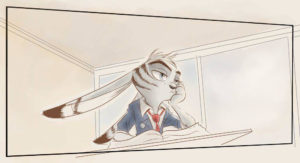 Every one of those sounds reached Jack’s sensitive ears, as he took his books from the locker. The hare exhaled a quiet sigh, the hubbub caused by the soft chattering around him slowly fading away, turning into the regular veneer of boredom he was now accustomed to.

It had become part of his daily routine, alongside lectures and practice; a constant presence in the morning, afternoon and even in the evening, when anyone should’ve been too tired to comment on the existence of a small hare in what was the headquarters of one of the mightiest Private Intelligence in the world.

Jack wasn’t exactly thrilled about the current state of things. Anyway, complaining about it fell outside his priorities. The five minutes he spent every morning to turn a deaf ear to the jabbering produced by the other mammals were already a significant waste of time, in his opinion.

As he was dealing with the fading voices, just then, one of them separated itself from the murmuring, carrying a conceit, colored by venomous sarcasm that the hare had reluctantly come to know “You still here, Turner? I thought they had kicked you out of the Academy!”

Jack sighed, then he slowly turned around. Before his eyes, the mammoth figure of Philip Hawthorne rose up like a mountain amongst the clouds. “Hawthorne,” he greeted him, bowing his head slightly. “Do you need something?”

The moose smiled at him; however, it wasn’t a pleasant one. Contempt was hidden in the curl of his lips – a contempt that Jack Turner still failed to understand, despite resorting to all the mammal’s empathy he was capable of – and in the way his small, sunken eyes were checking him out. “I’m surprised to see you still around, pal,” he said. “Your parents must have paid out a boatload of cash, for you to be allowed to stay in such a place.” He leaned over him and added: “You just won’t tell me how much your tuition is, will you?”

“I’m sure it’s lesser than yours,” the hare cut it short. There were so many things that he wanted to say, but no actual voice to give them. Jack had always hated this part of himself; he hated his ‘instinct of the weakest’, which prevented him from saying what was going through his mind… but most of all, he hated his inborn inability to oppose it.

It was, indeed, terribly frustrating.

Hawthorne cackled. “Of few words, as usual, aren’t we? But I bet you’ve got something to say, it’s written all over that cute face of yours.”

“You’re wrong,” Jack replied, feeling his throat suddenly constricted. “It’s just that class is about to start, and… I should get going now.” However, in spite of what he had just said, the hare didn’t take a single step, and he couldn’t tell if the force which was keeping him in place was foolish courage or stark terror.

“Class, huh? That’s also quite expensive, right?” The question sounded awfully rhetorical in Jack’s ears, as the moose’s minty breath assaulted his nose like a cold gust of wind. Then, the large mammal laughed: “Between room rent, lectures and training, I wonder how much money you pay in a single month. But I’ll found it out, pal. Ha!” For a moment, Hawthorne’s unpleasant guffaw overcame every other voice inside the hallway, and it felt like it had never existed another sound in the whole universe apart from that.

The thought perturbed Jack Turner’s internal balance, who finally dared to ask: “… Why do you care so much?”

The moose blinked and stared at him as if he had never expected a reply from such a tiny mammal. It made Jack proud of himself, in a sense, at least until that animal, many times bigger than him, narrowed his eyes and emitted a low, vibrating growl that sent chills down his spine and made every inch of his fur stand up in fear. At that moment, the hare was reminded of the reason why his instinct always begged him to keep quiet around the moose.

… And that reason was, that Philip Hawthorne didn’t like when mammals – especially the small ones – answered his question with other questions. Which, to be fair, was something Jack had grown accustomed to doing when he was asked about things to which he didn’t know how, what and why he was supposed to reply.

His dad would say it all the time: “This is a nasty habit of yours, son. It’ll get you in trouble faster than you’ll be able to run…”

A heavy hoof-fall just a few inches away from his feet abruptly dragged him back into reality. “You messing with me, rabbit?” He grunted, definitely not pleased. “I let you talk, and that’s all you have to say?”

It has to be congenital, the pusillanimity worming its way inside of him. Something that all the lapins had in common and, sadly enough, he was no exception. However, the hare had no time to wonder if he could actually win over his genetic makeup because the moose’s voice continued: “You’re not a wise animal, are you? You kinda look like an idiot, actually.” He said the last part loudly so that the other mammals around could hear it.

Some looked the other way, others sniggered or chortled without even bothering to conceal their waves of laughter. Jack knew he was supposed to hate each single of them, but, in the end, the only mammal he couldn’t forgive was himself. “Think what you want,” Jack murmured, trying to normalize both his breathing and his heart rate. He needed to keep calm if he wanted to escape Hawthorne’s clutches and proceed to class. ‘Hawthorne would be expelled if he harmed me. That’s why making fun of me and intimidating me are the only two things he can do.’ He restated the obvious, hoping it would give him the modicum more of bravery he needed to duck out quickly and avoid further moral damage.

“And are you okay with that, Turner?” The moose shook his head, looking almost disappointed. “You’re pathetic, pal.”

That was when he saw it: a breach between Hawthorne’s long and ungracious legs – which the moose had stretched apart in the act of making his scornful pose – large enough for the hare to get through them easily… assuming Jack worked up the nerve to ditch him while the latter was still intent of making a fool out of him.

… No, he couldn’t definitely do that.

“I’m late,” Jack stated, words that were born both from his already offended sense of punctuality and the premonition of what potential disaster was waiting for him in the classroom. “I gotta go.”

And then, the hare sprang free.

Since the only talent Jack was provided with was dashing faster than his chasers, it took him no time to outdistance Hawthorne enough to call himself out of harm’s way.

At least, that’s what his instinct of the weakest told him. He never turned back – not even once – throughout the whole run, which came to an end only when he arrived at the class’ door.

Then, the young lapin took a deep, long breath and went in.

Much to his relief, he had managed to arrive in class before homeroom.

Jack spent the first hour listening to Ms. Flaubert’s monotonous voice; she was reciting facts about the life of James Joyce as if they were ingredients in a grocery list, and the hare couldn’t help but find the lesson a little disrespectful to such a great and talented writer.

However, it was kind of a peripheral observation. Others were the thoughts lingering inside his mind, so many and confused that they were on the whole nothing but a nuisance.

When questions find no answer, they gangrene. Jack had learned that the hard way, in all those years he had spent raising unnamed questions which, in the same way as blind alleys do, always led him to a dead end.

That’s why he had eventually concluded that, sometimes, it’s better to stop thinking. Silence the mind. Follow the instinct.

From this perspective, Jack found his appreciation for Joyce a little paradoxical. The so-called ‘Stream of Consciousness’ was a literary technique in direct opposition to his approach to thinking. How could mammals be brave enough to let something so chaotic go on a rampage, giving up on any form of control? He didn’t know, and he didn’t possibly want to.

‘But… James Joyce really was bold,’ the hare thought. Maybe that was the reason why Jack liked him as an author, and why he couldn’t appreciate the way Ms. Flaubert was giving that lecture about him.

That consideration made his lips curl upward.

He wasn’t able to protect himself from the teases of the other mammals at GSD Academy, but he’d still find the time to feel offended if the English teacher didn’t give proper relevance to a writer badger died sixty years ago. ‘Maybe Hawthorne is right. I really am an idiot.’ Even his father had told him – that, and many other things he wasn’t exactly willing to recall – on the doorstep, the day Jack had made up his mind, packed up and left home to chase his aspirations. Maybe there was a kernel of truth in those words, and he…

Jack blinked and raised his ears. Ms. Flaubert was glaring at him, and she probably wasn’t particularly well disposed towards him, judging by the way the mink had narrowed her eyes. “W-what?” He eventually squawked. Perhaps it wasn’t the first time she had called his name?

“Did you hear the question I asked you, Mr. Turner?”

The mink shook her head with a sigh. “Your attention span is as low as usual. That’s not good for your grades.”

“I’m… I’m aware of it.” Jack bowed his head to the point it almost touched the desk. “I apologize, Professor Flaubert.”

She gave him another surly look, before returning her attention to the book she was holding in her paws. “As I was saying, Joyce wrote…”

Behind him, someone giggled. His hearing was sensitive enough to allow him to tell whom those voices belonged to; however, Jack chose not to be so attentive.

He breathed in, breathed out and closed his eyes for a moment. It always managed to surprise him, the way his mind could wander until he was completely detached from reality. There was no doubt that it was something of a talent – at least, he hoped so; however, Jack felt like it was a curse, more than a blessing.

However, one day, he could’ve turned it to his advantage. To do so… ‘I need to be in control.’

At all times, his consciousness should’ve been under strict surveillance; his thoughts alert and disciplined, like soldiers waiting for orders; his mind sharp and keen, not susceptible to any distraction. That was the mammal Jack aspired to become; the mammal he needed to become if he wanted to survive.

And if Jack Turner really was an idiot, then, all he had to do was pretending he wasn’t. He would’ve fooled them, every single mammal on the planet.