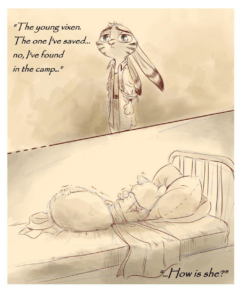 Gregory gave a deep sigh as he watched the world outside the window, feeling a fatigue that even thirty hours straight of sleep wouldn’t have been able to relieve. When he caught a glimpse of his eyes’ reflection on the glass for a moment, the dog discovered a mortifying sadness nestled in them, one he hadn’t felt in a long time.

A hard task was waiting for him. Hard, but most of all… ungrateful.

The Colonel didn’t wait for him to talk. Instead, he turned to the hare and said: “Jack, my boy; how are you?”

Jack Turner – or Savage, how he had taken to call himself recently, was small; small in stature, small in experience. But what about his heart? Judging by the concerned look in his eyes… no, that wasn’t small at all. And yet, still not big enough to carry the evil inherent in the world. “I… I don’t really know,” Jack said. “I’m not injured, but… I’m not feeling ok neither. I’m sorry I can’t explain my condition properly, sir… I’ve never been good with words.” The hare shook his head, as if he wanted to hunt down some unpleasant thoughts, and asked instead: “The, um, the young vixen. The one I’ve saved… no, I’ve found in the camp. How is she?”

“Physically speaking, she suffered no serious injuries.” Gregory opened the folder he was holding under his arm and flipped through the first pages. Even though he had already read the vixen’s name several times, he found himself struck by it again.

Cynthia Walker. Walker was… quite a meaningful surname, in Gregory’s opinion. Walker, the one who walks; despite adversities, uncertainty, and pain, the one who walks. That was the message the word conveyed to him. A beautiful message, indeed. But… what was Cynthia’s opinion in this regard? Would she have been motivated to walk the path her life had taken? That was a question nobody could answer, which instinctively invoked fear because of its unfathomable nature.

“Have you already got a hold of her family?” Jack inquired.

“You see…” Gregory started, then turned his gaze to the door beyond which Cynthia Walker was, lying in a hospital bed that was as much comfortable as it was useless. Neither its warmth nor its softness would have been able to prepare the vixen for the cold truth that was waiting to be revealed to her. “Sadly, it looks like Cynthia Walker has no longer a family to come back to.”

Jack’s eyes widened. “What does that mean, sir? Are they…”

“According to our investigation, Cynthia’s parents moved four years ago, and nobody knows where they headed,” Gregory explained, “which means that at the present time, Cynthia is orphaned as a result of the disappearance of her household. In other words, the poor soul you brought to us, Jack, doesn’t have a home anymore.”

The hare made a discomforted expression. “That’s… terrible,” he murmured, then turned to Cynthia’s room and asked, “What will happen to her, then?”

“In cases such as this, you usually try to put them in an orphanage. However – and now I’m going back to what I was previously saying – although Cynthia’s physical condition is stable, the same cannot be said about her psyche.” Gregory closed the folder and frowned. “If she could have got back to her family, possibly the situation would have been under control. But this way… it’ll be traumatic for her.” He could already imagine the consequences that placing her in an orphanage would have caused, and his heart ached.

“Are there no other alternatives available?”

“Finding a family who is willing to take care of her, for example,” replied the dog, “in other words, adoption. But even this solution involves risks, not to mention the complications in carrying it out quickly.”

Jack wrinkled his nose, apparently intent on some heavy elucubration – which was probably something he wasn’t used to doing, judging by the painful way he was clenching his jaw.

Gregory kindly laughed at such an extreme concentration. “You know, I wonder why I’m telling you about all this. You have no right nor permission to know these details, after all.” The dog leaned a paw on Jack’s little shoulder as he looked straight into his eyes: “Do you know why, Jack?” He probed.

The hare didn’t seem intimidated by that vis-a-vis. ‘He’s got guts,’ Gregory had to admit. ‘I like this kid.’ Jack lowered his eyelids for a moment, then shook his head. “No, sir,” he honestly admitted, “I don’t know.”

“Of course you don’t.” Gregory agreed, before moving away from him. Jack Turner was a no one, technically speaking. But that night, in that camp, something extraordinary had happened; a bond was born, the one that is formed between the savior and the one who is saved. Gregory respected that bond. Therefore, in his eyes, Jack had earned the unique privilege to know every single detail of Cynthia Walker’s situation, the first creature he had ever placed – consciously or not – under his wing.

However, it was clear as day that not only such a talk wouldn’t have penetrated Jack’s young skull – skull which, for the sake of truth, seemed extremely thick – but also, there was a risk that it would have blown his head apart. “Listen, Jack.” Gregory finally spoke; his voice became grave, and this time the little herbivore showed an even so slight hint of submission. “What I told you about Cynthia’s situation… has to be a secret between you and me. If I found out you intentionally or accidentally divulged them… you can already imagine what would happen in that case, can’t you?”

“… You would prevent me from officially enlisting in the GSD?”

“That’s absolutely right, my boy. So, you’ll hold your tongue tight.” It wasn’t even a question, but an order. The first order Gregory gave Jack Turner who, in the future, would’ve become one of his best agents. “Understood?”

Jack nodded. There was no hesitation in him, as if he was ready to do so from the very beginning. After all, the mere fact Jack was here meant that he was willing to do this and more; such a light order was nothing but the first step to climb to achieve his objective. A trifle not worth wasting even a split second to think about it.

Jack Turner was there because he wanted to become an Agent. His belief was as solid as a rock, and Gregory was sure it would have taken him far. Farther than anyone else. ‘Only death could make this guy desist. Death… or love,’ the dog thought. Then, a genuine laughter left his mouth. “Very good!” he said, and the heavy atmosphere was swept away in a moment. “I really like you, Jack. I can’t wait to have you among my agents. You’ll have to work extra hard, you know that, don’t you?”

For the first time since the day he had met Jack, Gregory saw him smile. “I know that, sir. I can’t wait either,” he replied. And in those words was the very essence of the creature known by the name of Jack Turner… or rather, Jack Savage.

Gregory smiled with him. Perhaps, that nickname suited Jack better than the dog had thought.

View all posts by aoimotion