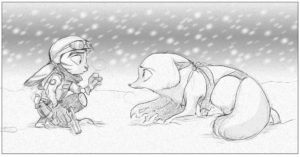 I could tell, because the air was filled with a strange vibrancy. Because, as the world around us was screaming, her amber eyes were just fixed on me as if I was the only living thing left on this planet.

Her fur was as spiky as the pine needles, her body tense as if she was about to jump on me, or jump away from me. She probably didn’t know herself what she was supposed to do.

Neither did I, to be honest.

Before I even realized, I was on my knees, one paw still on my gun and the other outstretched toward her trembling body. When she saw me doing that, she growled a bit. I should have been scared, because I was a hare and she was a vixen… yet, I wasn’t.

My mind was full of questions: “Who are you?”, “Are you okay?” were the more important, the more compelling, but even those wouldn’t come out from my mouth. I was speechless.

That’s why I smiled; reached again her slender figure with my paw and smiled, as if it was the only thing which could connect the two of us. I’ve never been used to smiling, but that’s exactly what I did. At least, what I tried to do.

And then, just then, she spoke with a low, uncertain voice. “Are you my enemy?”

“…” The vixen, who had been on all fours up until that moment, got up on her hind legs and stared at me. She was about my height, but since she was furrier than me, she looked bigger. Nonetheless… she was so small, in a way I couldn’t put into words. “Why should I?” she asked, eventually.

And that was it. That was everything I needed to know.

“You’re right,” I said, with a smile – but this time, it was bitter and self-conscious. “Come with me; I’ll take you away from this place.”

My words were pretentious; back then, I was only vaguely aware of this fact. Yet, the strength I felt growing inside of me, the resolve which was running through my veins, the simple desire to do the right thing at the right moment… all of these feelings converged into one, single emotion, and in a blink of an eye my gun had flown away, and both my arms were stretched in front of her. “Come with me,” I repeated.

It was a promise.