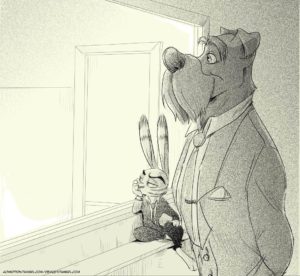 “How’s she doing?” Jack asked, walking inside the room. As Kohle gave him a perplexed look, he coughed: “Walker, that is.”

Colonel smiled. “Come and see for yourself,” he said, then turned again to the young vixen beyond the separating screen. “She’s talented,” he simply stated, but a prideful note sounded loud and clear in those few words.

Walker’s talent was something the hare had nor right neither intention to question. “That was not what I meant…” Jack tried to say, but he stopped as soon as he realized he didn’t know how to continue the sentence — what exactly did he mean? “However,” he quickly changed the topic, “how long has she been there?”

“Less than an hour,” replied Kohle, “but she’s working him like she was born for this.”

“To paint others into a corner? Yes, I agree with you.” Jack wanted to crack a joke, but he sounded more serious than he intended to. He hoped Kohle hadn’t noticed… however, judging by the way he was now looking at him, the dog had felt the frustration behind his words. “You two… I still don’t know if you get along very well or hate each other. Which is it?”

Jack shrugged. “Half ‘n half, I suppose. Overall, we sort of… communicate.”

“You’d make a great duo.” Kohle called him over; then, when Jack was close enough, he pointed out the weasel Cynthia was questioning. “She’s got the dialectics you lack, and you have a self-confidence she can only dream of. You complete each other.”

“We fight each other” Jack replied. “Quite often, actually. I think she despises me for some reason.”

“She doesn’t.” Kohle gave him a serious look. “trust me, she doesn’t; Cynthia is just a little… uncooperative? And shy, terribly shy.”

‘Shy? Walker?’ Jack frowned. “With all due respect, Colonel… I wouldn’t call Walker shy not even by mistake. As for uncooperative, though, I think it suits her very well.”

“Oh, my boy!” Kohle gave him a vigorous pat on the back. “You’re so dense it’s almost heartwarming.”

Before Jack could think of protesting, something happened in the interview room: the weasel suddenly jumped over Walker, showing his claws and teeth. Jack’s paw instinctively reached for his gun as his eyes were literally glued on the scene; he saw Cynthia dodging the mammal, grabbing him by the neck and ultimately pinning him down on the table.

All in a blink of an eye.

Jack was at a loss for words; his body relaxed, but his vision had been sucked into the fight to the point his brain was still processing what had just happened, replaying the scene over and over again. Soon after the incident, a panther came in and took custody of the weasel. Cynthia said something to the feline, then left the room mumbling to herself. That was when Jack finally came back to his senses and honestly thought: ‘Walker, you’re really something.’

As soon as she looked up and acknowledged Jack’s and Kohle’s presence, her eyes widened. “Wha… what are you doing here?” she asked, quite surprised.

“Observing you,” the Colonel replied, giving her a warm smile. “Amazing speed and reflexes, I must say.”

Cynthia shook her head. “Not exactly; I… had a vague prediction of how he was going to attack me, judging by his stance,” she explained, massaging her eyebrows. “At some point, I thought he was about to jump right on me, but they were just mere conjectures. I was nowhere ready to defend myself if he would have ended up assaulting me from another angle.”

“But… being able to make such a prediction, isn’t it proof you’re amazing?” Jack found himself saying, one second in advance of his own, poor brain. He blinked, a little confused. “What?”

“What?” Jack repeated, more and more confused. “Did I say something?”

The vixen glanced at Kohle. “Colonel, is this dolt making fun of me?”

The dog laughed wholeheartedly. Jack, for his part, scratched his – presumably – empty head. “You shouldn’t be so modest,” the hare said, still a bit dazed. “Your moves were, hum, splendid.”

“Splendid,” Cynthia repeated the word, clearly skeptical. “Well, if you say so…”

“See?” claimed Jack, looking at Kohle with utter dejection. “There can be no proper dialogue with her.”

Walker snorted. “That’s rich, coming from someone who doesn’t even realize when his own mouth makes a sound.”

“Who would want to start anything with him?” asked Cynthia with not-so-concealed disdain. Then, she shook her head and sighed. “However, can we please change the subject? There’s something more important I’d like to discuss right now.”

“I was about to ask the same thing,” stated Jack, slightly upset. “So, was the interrogatory useful?”

“James Hammond partly confessed his involvement in the C-51 incident, but we already knew that, so I tried to make him deliver some names.”

“And,” she said, a sly, black smile on her lips, “we have an accomplice, though her actual participation to the operation is to be verified. I already asked Hawkeye to look into the matter, so we should be okay for the time being.”

“Why not?” she responded, narrowing her eyes. “He just has to do some research. As long as they’re efficient, anyone could do it.”

It was true. Nonetheless, Jack couldn’t get rid of a certain unpleasant feeling. “Well, I suppose you’re right,” he eventually admitted. He caught a glimpse of Kohle’s playful smirk towards him and wondered why the dog had looked at him like that. ‘Another question I’m not supposed to get an answer for, am I?’ There were so many of them, sometimes, it was almost frustrating. “Do you, by any chance…”

Cynthia tilted her head, lowering her ears a bit. “Yes?” She encouraged him to complete the sentence.

But Jack wasn’t sure he should’ve articulated the rest of the statement. “… No, nevermind. It was not important anyway.”

“Oh, c’mon Jack,” laughed Colonel, “why don’t you just spit out whatever is in your mind?”

“I want to know” Cynthia said, unexpectedly, “the unintelligible thoughts wandering inside your thick skull, so inappropriate you can’t even say them loud.”

“I’ll live the rest of my life remembering your hurtful words and bearing with them, but now… tell me. What were you trying to say?”

Jack gulped, ignoring the reason why he had gulped. Really, what a stressful day. “I just wondered, for a half second, if you’d need any help with the case. You know, aside from Hokey’s help.”

“Yes, him. But, as I said, it’s not important. And you probably don’t need any help anyway, so…”

Cynthia frowned. She seemed confused – not as confused as him, but… still confused. At least he wasn’t alone in his internal turmoil. “I… appreciate it,” she finally said, uncertain. “If you want to help…”

“I don’t want your help either!”

“Is this some sort of bad joke only stupid mammals can get?” Cynthia gave him a terrifying look. “Because, if it is, I’m afraid I’m not stupid enough to get it.”

“I’m completely serious,” Jack replied, unwaveringly. “That being said, I’ll take my leave now. Colonel, Ms. Walker, have a nice day.” The hare nodded at both and left the room, trying to not think of anything. It’d have been too frustrating for him.

“What’s wrong with him?” Cynthia sighed, placing both of her paws over her face and rubbing it. “Why is he like… like this?”

“Because he excels at being a righteous agent, he must fail to something else. It’s the equilibrium, Cynthia.”

“Maybe so, or maybe not. Nobody is perfect, but the balance between pros and cons is what really defines us. Jack is a bit unbalanced, but he’s definitely not a bad guy. You should know that, shouldn’t you?”

“… There’s no way I couldn’t know that,” she muttered. “But sometimes I just… can’t stand him. He frustrates me.”

“He frustrates you because you let him be close enough to do so.”

… and that, too, was something Cynthia was aware of, and she detested that side of her. “So, it’s my fault then.”

“Yes, it is. But what a beautiful fault it is, my dear!” Kohle claimed, putting an arm around her shoulders. Cynthia felt like she was blushing – yet another reason to hate herself. “Don’t worry, he’ll grow. Both of you will.”

“And things will be worse.”

“Or better.” He winked. “You don’t gain a single thing from being negative, Cynthia. So, believe positive things will happen to you, too.”

Cynthia didn’t reply, for the simple fact she didn’t know what to say. Gregory’s kindness was still too bright for her, sometimes, and his optimism was far beyond her comprehension. Instead, she pondered: “Was I right to ask Hawkeye to investigate in my place?”

“Alexander is a good agent,” replied Kohle; but for some reason, she perceived that answer as a little elusive. He continued, after a brief pause: “It’s your task, Cynthia; I personally entrusted you with it. Who you choose to be helped by… no one has the right to question your decision. Except for one mammal.”

“… Jack Savage?” It was strange; how did his name ended up on her lips? Why that? Cynthia bitterly lectured herself. ‘I’m being naive. Again.’

At that point, Kohle’s laughter echoed across the room; powerful as a snowstorm, warm as the fireplace Cynthia used to stare at when she was young, light-hearted and full of dreams. An epiphany occurred in her mind; memories of pure bliss and joy, memories of being loved, protected, soothed. Tears gathered at the corner of her eyes, melancholy poured into her heart. As she felt such a kaleidoscope of emotions, the dog gently spoke from above her head: “I was referring to you, my dear. But if you trust Jack to the point you’d grant him permission to act in this regard… I suppose you should listen to your heart.”

“No, I–” her voice cracked under the emotional pressure. “He’s not… I mean, I don’t…” She resorted to all her strength not to cry. But in order to avoid such an embarrassing act – ‘You’re not a child anymore, Walker!’ – she had to keep her mouth shut.

Kohle probably understood her feelings, because he said: “Don’t worry, Cynthia. It’s okay, everything is okay. You are okay. Don’t stress your mind over it. Follow your instinct, trust it and go on.”

She nodded, muttered a rough “Excuse me” and left Gregory’s reassuring presence, her mind full of inconsistent thoughts, her pride miserly crumbling on itself.

Frustration was the only emotion she was capable of.