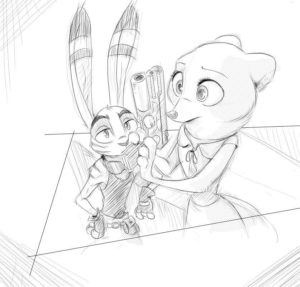 She was aware of this fact; yet, she couldn’t bring herself to talk to him. She didn’t dare. He was… close and distant at the same time, almost unreachable. Words that begged to be voiced always ended up lingering inside her mind, where no one could hear them.

“You are…” A voice spoke behind her back.

Cynthia turned and saw a male wolf. He looked a bit confused, as if he was trying to figure out who she was. “Oh, good morning,” Cynthia said, showing him the pass Gregory had given to her. As soon as she did it, the wolf’s eyes widened.

“No need to bow your head,” Cynthia quietly replied. “I’m just a visitor.”

“Please,” she insisted, “don’t worry about me.”

The wolf gave her a perplexed look for a second. “I’ll be going, then. Tell me if you need something,” he said, and then left.

At the same time, Jack Savage stopped his practice and greeted her from the shooting range. “Hi there, Miss Walker.”

“No problem, I had almost finished.” The hare exited the fenced area and removed his ear protection. “What brought you here? Do you have a message from Kohle?”

“Er…” Did she have a message from Gregory? No, she didn’t. So, there was no reason for her to loiter in that place… but she couldn’t simply say something like that. “Yes!” She improvised, “he said he wanted to… have some tea with you.” ‘I’m such a moron.’

“A-and talk!” she added. “About… something important, if I remember correctly.”

“One of these days. He’ll eventually tell you the details, so, hum… b-be ready.” Cynthia looked down, flustered because of her own stupidity. Her eyes accidentally fell upon the gun Jack was still holding in his paw. “… Nice weapon.”

She realized one second later she had said it loud.

However, Jack seemed positively surprised. “Do you think so?” he asked, shrugging. “To be honest, I don’t think it really suits me.”

“I think it suits you!” Cynthia claimed. “I think… you and the gun make a nice couple.” ‘Good grief, Cynthia, just stop talking—’

Just then, Jack sniggered. “Well, thank you, Miss Walker. Assuming it was a compliment, that is.”

Cynthia felt incredibly stupid and wanted to escape, but it seemed like her back legs were glued to the ground. So, she had no choice but keep talking. “What model is it?” she asked.

She hesitated. Cynthia had never handled a gun; she didn’t even know how to hold it. And yet, she took the weapon with concealed excitement.

It was heavy, but not too much. And, more importantly… it made her feel like she was powerful. Cynthia raised the gun and pointed at the wall. She was probably smiling. “Amazing,” she breathed.

“… Oh.” Cynthia quickly lowered her arm and returned the Tokarev to Jack. “I couldn’t have fired, though; I never pulled a trigger before. Not like I wanted to do it, anyway.”

An awkward silence descended upon them, until Jack said: “… By the way, Miss Walker, tell Colonel I’m waiting for his instructions.”

“Eh? For what?” Cynthia gasped. And then remembered. “Oh, yes, the tea… the tea he’s willing to have with you. The tea.”

“That’s… correct”. Jack took a step back. “That being said, I think I’ll… get back to practice. There are targets I still need to, you know… hit.”

“Yes, of course. I’ll take my leave, then.” Cynthia looked away, embarrassed. “Have a nice day, Mr. Savage.”

“You too,” he replied, before returning to the shooting range.

Cynthia watched him for a while; he was tiny and slender, but a strong aura surrounded his figure. It was almost like nothing could make him waver.

‘I want to be like him,’ she found herself thinking. ‘I want his strength, his composure, his dedication.’ Because she felt exposed, she had to protect herself; to do so, she yearned to be strong. Because she was weak.

She finally departed from that place, an unpleasant feeling carving into her heart like a knife. Being weak was an illness she could no longer tolerate.