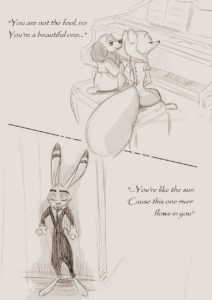 “It was very kind of you to invite me here, Colonel.” Jack slightly bowed his head, then looked around with discretion. “I have to say you have a nice mansion.”

“Don’t be so formal, my boy.” Gregory Kohle gave him a firm, yet kind smile as he closed the door. “Today you’re here as a guest, so relax and enjoy your stay.”

“Yes sir,” Jack said, then he corrected himself: “I mean… yes, thank you for the opportunity.”

“Jack…” the dog sighed, “is this the first you got invited to someone’s house?”

“Ok, so here’s a tip: don’t look like you’re inspecting the scene of a crime. It’s kind of… awkward.”

“Oh. Oh.” Jack slightly scratched his neck, now unsure of where he was supposed to look… and how. “I apologize for my rude behavior.”

“With pleasure.” Jack followed him, and the two mammals left the entrance.

“Come to think of it,” started the dog, “I never introduced my wife to you.”

“She’s the most beautiful creature in the world,” Gregory continued. “My most precious and inestimable treasure.”

“I see,” Jack replied. But, to be honest, it was extremely difficult for him to conceive such a deep and strong feeling. However, he knew – by hearsay – that mammals fall in love with each other, and that’s how babies come from. So, his understanding of the matter was, if anything, academically correct.

“Oh, also: there is another mammal that you should meet. However, she…” At that moment, they were close enough to the salon for the voice coming from the inside being audible in the corridor.

Or, more correctly… the voices.

Jack, who was walking behind the colonel, suddenly stopped moving. Gregory noticed it and stopped too. “That voice…” Jack murmured. His ears involuntarily reacted to the sounds coming from the salon and he moved toward them, almost pushed by an invisible force. Behind him, the colonel merely followed him without saying a word.

“… Here,” a voice was speaking; one Jack didn’t know. “Here’s the difficult part. Do you want me to play it again?”

“No, I guess I got it,” said the other voice – this time, it sounded so familiar to him. So incredibly familiar. Yet, at the same time, incredibly distant. Whose voice was that? Jack stepped forward, but he didn’t enter the salon.

“Ah…” Jack sighed and turned to the Colonel. “I’m sorry, I was… huh?” He found himself listening, for the familiar voice had started talking again.

“Well, let’s see…” Those words were followed by the sound of some notes played on the piano. The tune was pretty, but then it stumbled and the voice protested: “Ugh, I played it wrong again.”

“Don’t rush, Cynthia. I’m sure that with a little practice you’ll be able to play it in no time.”

‘Cynthia…?’ That name rang a bell in Jack’s head, and he quietly whispered: “She wouldn’t happen to be…?”

“Yup.” Colonel’s big, brown paw gently rested on his shoulder, but the hare still jumped a bit when he felt his touch. “So, you still remember her.”

“Why don’t you go and say hello?” The dog asked, nodding to him towards the salon. “C’mon, don’t be afraid.”

“I’m not afraid,” Jack replied, promptly. “It’s just… I don’t think she remembers who I am. It’s not like we talked a lot or anything, so…”

“Oh, such pain and sorrow!” Gregory claimed, but the laughter that was coming out of his mouth was neither painful nor sorrowful. “Well then, why don’t you stay hidden behind the wall while I go inside and congratulate with Cynthia?”

“Wait—!” Jack tried to reach Gregory’s sleeve, but the dog had already stalked into the salon with two powerful footsteps. He followed Colonel’s movements until his eyes caught a glimpse of a white silhouette and he completely hid behind the wall. ‘But why am I hiding?’ He asked to himself, feeling stupid for some reasons. He then tried to join Gregory, naturally… but his feet were suddenly glued to the floor and he couldn’t take one single step into the room.

“Really? It sounded perfect to me. What’s your opinion, Professor Northwood?”

“She was playing just fine, until this point. But it’s okay, it’s a complicated melody, and that passage is pretty tricky.”

“You see? If Cecilia says so…”

“What nonsense,” replied Cynthia, dryly. “You should never give up just because someone says it’s difficult.”

‘Very well said!’ Jack agreed, delighted, inside his head… and that sudden brain activity reminded him that he was basically eavesdropping a conversation behind a wall for no better-identified reasons, and a sense of deep and distressing discomfort hit him like a speeding train.

“With your current experience, darling, it would be virtually impossible to play this piece with no mistakes,” said the gentle voice of Colonel’s wife.

“Hey, I got an idea. If you have difficulties in playing that specific part, why don’t you try to sing it?”

“Gregory could be right. If you try to sing the tricky part, you could get acquainted with the melody itself and play it on the piano more smoothly.”

“I’m not sure this is a good idea, to be honest.” Her voice had become uncertain – now it was very different from the one that just a minute ago had spoken of courage and bravery. “I don’t even know the lyrics…”

“I’ll teach you. Honey, would you please get me the book on my bedside table? The one with the green binding.”

“Of course.” Jack heard Colonel’s steps approaching him and flattened – in vain – against the wall.

When Gregory saw him, he just laughed. “Are you still looking for a good reason to come in, Jack?”

“Don’t worry,” the dog interrupted him, “you’ll find a valid one very soon.” Then he moved away, humming the motive that Cynthia was playing before.

He came back a little later, holding what looked like a quite old book. The binding was a bit ruined, but it must have been of a beautiful emerald green in the past. Gregory glanced at him and winked, then disappeared into the salon.

“Thank you, darling. So, let’s see…” Jack heard the sound of thick paper pages being flipped. “Found it! As for the tricky part…”

“It should be this.”

“Right, good girl. So, I play the part of the right paw, which is the most complicated, and you play the left one as you sing. Is it okay with you?”

“And the audience would be… you two?”

“Who knows…” Gregory laughed, shortly followed by his wife.

“… Whatever.” Cynthia sighed, then said: “Shall we play?”

Cynthia cleared her throat, took a deep breath, and then… she began to sing.

You are not the fool, no

You’re a beautiful one

‘Cause this one river flows in you

You are not the no one

You just look for more here

Who does care because you are the one

It was the most beautiful song Jack had ever heard in his life. Not that he had heard so many people singing, but he was positively sure that very few voices could match that beauty.

The melody she was chanting danced inside his ears, leaving a warm sensation, like a kind caress. Jack relaxed and slowly sat on the floor, eyes closed, concentrating all his senses on the vixen’s voice. There were no words that could explain the emotion he was feeling – something between pure bliss and melancholy, something that reminded him of memories of a long time ago. Joyful memories, sad memories, even angry memories. But everything was blended just so perfectly that he couldn’t figure out what kind of feeling was the one ultimately blazing inside his chest. But he didn’t care, because his only desire was to listen to Cynthia’s beautiful voice as long as he could.

Then, the song came to an end. Jack opened his eyes as if he had awakened from a dream and stared at the wall in front of him with an empty expression… that slowly filled up with the only emotion he could feel after listening to Cynthia’s singing: wonderment.

He suddenly got up and, without even indulging in a single change of heart, rushed into the room.

… Well, actually, just the first three steps were fast. Because, when he noticed the look on the three mammals’ faces – each one showing a different emotion – his pace slowed down to the point he eventually stopped… and barely held back the urge to turn around and go on the run.

“Oh, Jack, you finally decided to show up!” Gregory laughed and came towards him, perhaps perceiving his temporary disability. The dog put an arm around his thin shoulders and asked: “Cynthia, do you remember him?”

A part of Jack really wanted to scream. Another part questioned that uncool urge and requested a diagnosis on Jack’s brain, but the recesses of his mind didn’t return any positive feedback.

“…” Cynthia, still sitting on the piano stool, stared at him with astonished eyes. “You… you are…” She slowly raised a finger and pointed at herself; then, she pointed at him. “You were… there.”

Jack instantly figured out what she was talking about and nodded. “Yeah, that’s right. I was… there,” he repeated, finding no better way to articulate the sentence.

The two looked at each other for a while, until Cynthia blinked, slightly shook his head and… “Wait, were you hiding behind the wall all this time?”

“Huh? N-no, I wasn’t hiding!” Jack replied, realizing on which subject the conversation had just been steered. “I was just, you know… waiting.”

Cynthia looked at him with suspicion. “For what?”

“Well…” Jack scratched his cheek. “For the right moment… I suppose?”

“To…” he coughed, feeling his throat clogged. “… Come and greet you.”

For a moment – a long, looong moment – Jack feared further objections from the vixen. But after giving him a final, penetrating glance from head to toe, Cynthia just replied “Okay,” and turned to the piano again.

Jack looked at her back, confused, then turned his gaze to Cecilia Northwood, who shrugged with a smile. “Jack, would you like something to drink?” she asked.

“A tea… would be perfect,” he said, still a little stunned.

“Oh, just like a true-born Englishmammal!” She giggled, then proceeded to leave the salon.

Next to him, Greg gave him a small pat on his shoulder and winked. “It went well, didn’t it?” He whispered.

“What?” Jack raised his head and looked at the dog with horror. “I-In what sense?” He realized he had raised the tone of his voice because Cynthia was glancing at him with questioning eyes. He gave her a half smile, then went back to Gregory: “What… what do you mean?”

The colonel laughed. “Just kidding, my boy. Don’t worry!” He gave him another pat and walked away from him, towards Cynthia. “Why don’t you start going in the living room for the tea? We’ll reach you soon.”

Jack saw him approaching the vixen and murmur something in her ear. At first, she shook her head, but then she dropped her shoulders and started to rise from the stool. At that moment, Jack jumped away, to the living room, with a speed that actually surprised himself.