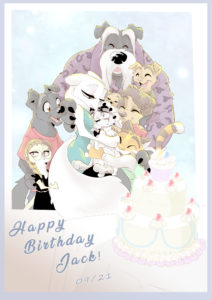 “So…  even on a day like this, our dearest Jack intends to be coy, huh?”

When Cynthia’s voice reached him from over his shoulders, so close that he could feel the warmness just behind his ears, it took Jack a considerable effort not to make a vertical leap which would’ve sent him outside the Earth’s atmosphere, hurtling toward worlds he could hardly imagine. And one more massive effort helped him to control his tone, as words composed by some sort of emergency generator of his mind flooded out like spurts of fresh water: “I didn’t mean to escape the celebration; I was just, you know… preparing psychologically. I’m not used to this anymore.”

Behind him, he heard her giggle. “What is this that you’re not used to, parties?”

‘To any of this,’ the hare was about to jest. He felt Cynthia’s arms sliding in front of him, knotting tight around his waist, and those little bits of sanity and self-possession he had managed to gather in the loneliness of the dimly lit hallway, all his efforts to cool down and behave normally in front of her… everything melted away in a heartbeat, like snow bathing in the sunlight. ‘To you, your warmth, your scent, your affection, and…’ Jack swallowed hard; even thinking about it was enough to cause him to shake like a leaf. ‘… And this alluring body of yours that torments me day and night.’ “Let’s say… it’s one of many things.”

“Oh, I see.” The arctic vixen leaned her chin on his shoulder and rubbed her cheek against his. “You do realize it’s not nice of the birthday boy to flee away from his guests, right, Jack? Everyone’s waiting for you, let’s get back… ah,” she stopped, giving him a scrupulous sniff, “Such a good smell that you have today, I hadn’t noticed. It’s not your usual cologne, is it?”

It proved rather challenging to rescue his vocabulary that she had just thrown into the abyss of oblivion by merely placing her wet nose against his neck, to the point that when Jack managed to form a response, he was left with the doubt that someone else was talking in his place. “It’s an essence I bought last week. It’s very intense… very… yeah, intense.”

“Would you mind repeating for a third time? I don’t think I quite grasped the sentence.” Cynthia pulled him deeper into her hug as though she wanted to blend their bodies together, push him into those soft shapes of which Jack had become an addict, a slave, and a secret and dedicated amateur. “You know, I can’t decide if I like you more when you go full ‘Super Spy Mode’ or when you look like a baked potato.”

“Should I feel honored to be called a baked potato?”

“Of course,” she replied without hesitation, “after all, I love baked potatoes, all kinds of potatoes, actually. I would eat heaps of them. Too bad that someone,” and in saying that she placed her sharp canines against his neck, “and I stress, someone always has a say in my diet.”

“Excesses are unhealthy, without exception,” declaimed Jack – but did those words actually leave his mouth? Or rather, did he just think of formulating a statement, since no air ever made it to his vocal cords? – “Besides, weren’t French fries your favorite kind of potatoes anyway?”

“Well, yes, but baked ones are my second favorite.”

“So… are you telling me I’m the second choice?”

Cynthia became silent. Jack had no doubt that she had stopped talking, not because she resented his remark, since the grip around him (and about that, wasn’t her hug a little too low? Honestly… he was a male, and she was Cynthia! The vixen should be more discreet, more leery, more…) hadn’t lost one bit of its strength; nevertheless, the hare couldn’t avoid adding: “Hey, I was kidd…”

“Do you want to be my first choice, then?”

The inquiry reached him from another galaxy. “… What?”

“I said…” The voice cracked on a slightly too high note on the ‘a’, “Would you… like to be my first choice?”

“Um…” It was as if his mind had just been immersed in a bucket of whitewash. Jack was speechless, thoughtless, so light that he felt like he was fluttering in the air like a helium balloon. Except Cynthia wouldn’t have allowed him to leave the mainland; her arms were two firm anchors berthed on reality, with no intention of letting him go.

But still, that reality was so filled with a joy that almost scared him. Could one want to escape from pure happiness? “If you’re not interested, j-just say it.”

“Being my first choice!” she squealed, her tone rising an octave or two again. “A-and anyhow, I called you a baked potato just because I think they’re cute.”

“Look, I don’t want to argue with you on this.”

“W-who says things I don’t know how I’m supposed to reply to!” ‘She finds me cute… cute like a potato…?’

“It seems to me that I asked you a very specific question,” the vixen grumbled as two claws, which probably had the same meaning as a gun pointed at his temple – although they made a completely different impression on Jack – were pressing into his abdomen, “One you can answer only one of two ways: yes, or no. It’s not that hard, Jack.”

“I’m pretty sure that’s not how it works…” The upper limit of whatever force was preventing him from spiritually crumbling into the clutches of his beloved lady was a thin line looping around his throat, progressively shortening the time Jack had left before Cynthia would find out how utterly, desperately and irremediably in love the super spy/baked potato (depending on the interpretation of the moment) was with Cynthia Aurora Walker.

Ah, what a grand carousel of emotions it would have been if she had discovered the truth on his twenty-ninth birthday.

“So, what do you want to do?” She brought him back to reality with a crash of neurons in which at least a fifth of them tragically lost their lives. “Do you want to become a French fry or not?”

“W-well, I think…” –  ‘I think it’s a mere matter of time before my cologne is no longer enough to hide the disastrous effects you have on me, my dear’ – “If that’s your birthday present for me, I think I could… consider the proposal, um.”

“But I’d be grateful if you could find a title a little courtlier than French fry.”

“It’s the thought that counts!” Cynthia nibbled at his cheek, and Jack made a sound that was not of this world. “S-sorry, did I hurt you? Oh, Jack, I’m so sorry… my teeth kind of, er, slipped.”

Jack didn’t give her any feedback. Providing her with a verbal reaction would have presupposed an operating brain, but since his blood had already begun to flow all in one single direction, very low oxygen came to his grey matter, and what little got there was used only to picture the actual way the hare would’ve liked to spend his birthday… and with whom.

“Are you angry…?” Cynthia’s voice became a faint melody of remorse. “You can tell me if it hurt. There’s no need to act tough with me.”

“No.” Jack took a breath that was as deep as the Pacific Ocean. “I’m fine, and I’m not angry. But…” His face was tingling where she had bitten him. And it wasn’t the sole thing that tingled. “We should rejoin the others, now. They’re certainly wondering where we went.” ‘Maybe they think we’re spooning. And they would be 33% right.’

“Meh.” Cynthia hugged him even tighter, and he almost believed she would have refused to break the embrace (which was very healing for the soul, but also very demanding for the body). “Are you sure you’re not angry?”

“Because I bit you.”

Ah, she was such a stubborn girl sometimes. “Didn’t I tell you that I’m not?” Jack tilted his head back so that he could see her face. His heart throbbed at the sight of Cynthia’s unbearable cuteness; she was too good for him, he wanted to smooch her right away. “Let’s get back to the party, shall we?”

Cynthia exhaled a long sigh just over his nose, sending shivers of pleasure right down his spine. Her breath was moist and smelled like the hot chocolate she had drunk about half an hour ago. “Okay…” She muttered, giving him a final glance of disappointment before releasing him.

When Jack found himself freed from her arms, the sense of emptiness that struck him was so disheartening that he thought he would start crying and kicking around in frustration. Of course, there was no way he could do any either of those things.

He did a third one, though.

“Cynthia.” Jack turned and looked her in the eye. They were two pools of honey, a breathtaking marvel.

With nothing further being said, the hare lifted a paw to take hers. He found it, squeezed it hard as he murmured: “Just… thank you.”

Cynthia stared at him until a smile painted her lips in fondness. It made him feel so pampered and loved. “For what?”

“For being here with me.”

“I am being serious here,” Jack objected. “I want to thank you for the precious support you provide me w—”

A half second later, Cynthia was dangling on his neck again, their paws still connected. The heat saturated him so quickly that he barely had time to wonder if Cynthia could sense the miserable state his pants were in before she whispered: “You can’t turn all sentimental without prior notice, Mr. Turner. There’s a tax to pay for this sort of thing, did you know that?”

“The same tax you punctually walk away from… Ms. Walker?”

Cynthia muffled a little laugh in his shoulder. “Yeah,” she said, “that’s right.”

Jack couldn’t help but chuckle at that adorably childish flippancy. Would it ever be possible not to fall in love with her? When his free arm found its rightful place around her endearing hips, he realized the condemnation had probably been issued many, many years before. There had never been escape from the very beginning.

“Anyway, come to think of it… the correlation between French fries and I could be appropriate. I mean, regarding physical appearance, I hope you wouldn’t compare me with a round, baked potato.”

“Oh, so that’s what Mr. Narcissist was worried about the most, after all.” Cynthia’s teasing became a silky caress against the thin fur inside his ears. “Are you subtly inviting me to praise your lithe, muscular body, perhaps?”

‘That’s it,’ thought Jack Turner, who was suddenly reminded of the sadism Nature had designed males’ reproductive organ with – and his own in particular. ‘That’s precisely why front hugs are frightening.’

Surely, a baked potato would have no such problem.