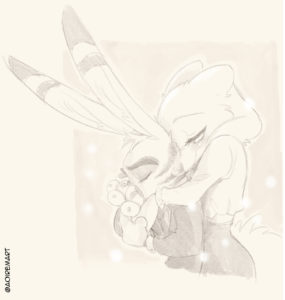 “It’s not acceptable; simply not acceptable.” Jack Savage’s grievances could be heard in the deserted hallway as he stalked toward the Colonel’s office with his paws shoved in the depths of his pocket. “When did the organizing of this place start to leave this much to be desired?”

Behind him, a certain arctic vixen was tagging along with him, struggling a bit to keep his brisk pace. She listened to his voice, usually so calm and collected, coloring itself with indignation, and a resigned smile couldn’t help but curl her lips as she said: “You’re not exaggerating things just a little? It’ll only be for a few days, you don’t need to…”

Pivoting on the heel of his right foot-paw, Jack turned to her, quick as a gust of wind. “I had specifically asked not to be assigned to any mission without you, for the time being”, the hare asserted, frowning with clear dissatisfaction, “and I absolutely won’t compromise on this matter.”

“No, it’s a point of principle. I’ve clearly stated to the CEO my intention to not leave your side, given the current situation, and I distinctly remember I had been granted this request, ergo…” Jack went on rambling, exposing the reasons for his protest with the utmost punctuality. Cynthia nodded, repeatedly, secretly flattered by all that eagerness but unable to share it with him ultimately. He would have to leave for four days and, of course, Cynthia knew it would be four long days for both of them, but… how could she, even for a split second, be dissatisfied while looking at his indignation? He was so precious that… “… Cynthia?” The hare stopped in his tracks and watched her as his expression slowly changed from discontent to abashment. “W… what are you doing?”

“Nothing”, she replied, despite the distance between their muzzles having just shortened by a good four inches, “Just listening to your ranting.”

“Do you have a problem with that?”

“I didn’t say that, but…” Jack’s ears flattened behind his head and the hare shied away from her; she was expecting that kind of reaction, but actually witnessing it was even more adorable.

Not like that altered her plans for him as she leaned further over him, the amber of her eyes mingling beautifully with those light-blue of Jack’s. “But…?” Cynthia spurred him on, teasingly, enjoying every shade of embarrassment that gradually appeared on the hare’s face.

“Never… never mind”, he wavered for a moment, before turning his back to her again and resumed his walk; but then, his steps weren’t as steady as before, and his figure wasn’t perfectly erect, and his ears didn’t seem to have any intention of standing straight over his head, but they were tortured by small twitches that forced them to bend slightly to the side.

If Cynthia had looked at him from the front now, she probably wouldn’t have found any trace of the frustration that had prompted Jack to head to Gregory’s office. Instead, she would have found a roasted hare, bogged down in the deepest timidity and with a secret, unspeakable, urge to be cuddled to death.

An urge that Cynthia wanted to meet quite passionately, to be fair; and yet, the elegant calm with which she put her arms around his shoulders and rested her head on top of his before he could slip away from the moment almost managed to surprise her very self. “Where do you think you’re going, little hare?”, she asked, her solid grip absorbing the obvious gasp that Jack made when he found himself trapped within her. “I’ve got you now.”

“W… what do you mean, ‘where am I going’?” He crackled, the stiffness of his body resembling that of a corpse. “Rather, w-what are you doing all of sudden?”

“It’s your fault”, was her simple response as she proceeded to rub her chin against his fur. “Suffer the consequences of your actions, would you?”

“For being this caring; worrying about me… not wanting to leave without me, even if it’s for work…”

“Shh.” Cynthia placed a paw-pad on his lips, “You’re not supposed to talk right now.” The vixen felt his mouth trembling slightly against the soft, hairless skin and she giggled, delighted. She just loved when Jack languished in the thick shroud of her affection until he couldn’t take it anymore. “So, don’t be surprised if I hug you out of the blue; it’s the least I can do to return so much endearment toward me.”

With a slow, careful movement, Jack eventually placed a paw over hers, firmly anchored in the middle of his chest. “… I don’t think I’ve done anything to deserve this sudden surge of love”, he replied, “and I’ll never get used to it, either.”

“Because…” It was like words wouldn’t come to him anymore; Jack bent his head to kiss Cynthia’s paws, ruffling the white fur with a quiet sigh as he murmured: “We should go now; I still have a complaint to expose, after all.”

“Don’t wanna”, Cynthia whined softly, “It feels too good to stay like this. Don’t you feel good?” Nothing she had ever experienced in life would compare with the completeness that filled her whenever they found a moment to pamper each other. It was the perfect bliss, and she would have spent days in this state.

Jack chuckled, ever so lightly. “I can’t believe you’re really asking that.”

“Seriously… what a spoiled girl you are.” There was so much tenderness in his voice, in the way each word sounded like a gentle stroke in her ears, made warm and sensitive from the intimacy they were experiencing. Cynthia wanted to pick him up and take him home, rub her face in his chest and then curl up on him until the next day. Her tail started to wiggle unabated when she thought about the delicious possibility. “Besides, you already know the answer, don’t you?”

“Oh, come on… just tell me; only once, and then…” She held him even tighter and placed a long kiss on the back of his neck, “I hereby promise I’ll let you go on a rampage with Gregory.”

“You…” Cynthia heard him inhaling sharply, before continuing, “You aren’t making things easy for me, with that pleading voice of yours. I’m being put at a disadvantage here.”

“A female won’t hesitate to use every single weapon in her possession to get what she wants.”

“If it’s my death that you desire, then you’re probably on the right track”, he said with a light laughter, “But it would be very hard for me to speak, in death.”

“Then do it now, before you die”, Cynthia whispered in his ear, so close that she could touch it with the dampened tip of her nose. She would’ve given anything to see what expression Jack was wearing at that moment, but she’d settle for imagining it as she languidly slid her arms down from his shoulders to his waist. “You could be more cooperative, since I’m begging you so much.”

She felt Jack becoming rigid for a moment before allowing himself to melt into her embrace, lean against her chest as he started to toy with the fur at the back of her paws, gently. “How about… we postpone this until tonight?”

“Huh”, he nodded, caressing the joints between her fingers, intertwining them with his when she released a little whimper in response, “Come over to my place, have dinner with me, and then…”

“As long as you want, any way you want.”

“And… you promise there won’t be any distractions? No books, no movies, no calls, no work, nothing at all?”

“I promise”, Jack said, tilting his head upward so that he could reach her chin with his mouth, “I’ll give you everything you want.”

Give her everything she wanted… Cynthia quivered, a brand new wave of heat rising and lapping onto her. The thought of letting him go felt simply unbearable, even with the prospect of the treat Jack had just offered her. “… Just know that I’ll be the most spoiled vixen on earth.”

“And you won’t be allowed to leave me, not even for a moment.”

“That sounds fine to me.”

“And! If I happen to fall asleep on you…”

“… Okay, I’m not entirely sure I will be able to fulfill your next request…”

“… You won’t wake me up; you won’t take me to bed, nor will you leave me. W-we’ll sleep together on the couch.”

“We… we can talk about this, Cynthia.”

“B-but…” The protest died on his lips when the vixen nibbled at the base of his ear, to be replaced by a chirring sound that made her chortle wholeheartedly. “You are a pest…”

Cynthia shook her head, “Not a pest…”